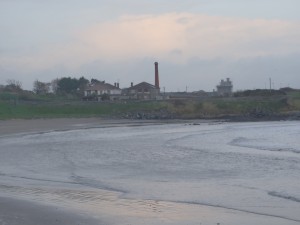 We woke to another lovely Irish morning with no rain greeting us so I headed for a run along Balbriggan beach and Arthur for a walk of the town and harbour.  It is a beautiful quaint little seaside town  just an hours drive north of bustling Dublin City. 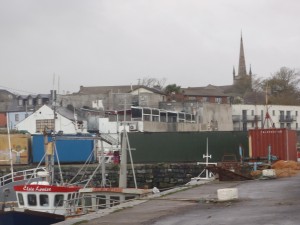 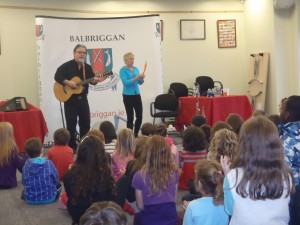 Our first of 3 shows for the day was in the Balbriggan library right beside our Bracken Court Hotel.
It was extremely convenient as no sooner had we packed up and headed next door to set up for our  10 a.m. show, the rain indeed began. 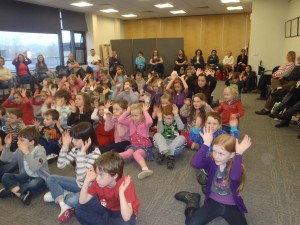 We had a wonderful participating audience of about 100 children and parents who were very appreciative of our show (and of the chance to have an activity to go to with no school on for the week). 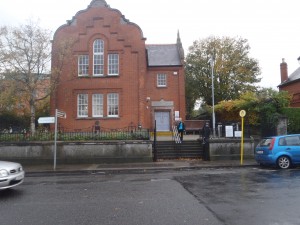 There was no time for dilly-dallying afterwards since we had to be performing in Malahide Library (a town 30 minutes away) at noon. Off we scooted only to run into road construction and a detour just outside of Malahide.  We arrived in time for a 1o minute set-up (which usually takes 30 minutes), and then on went the show. 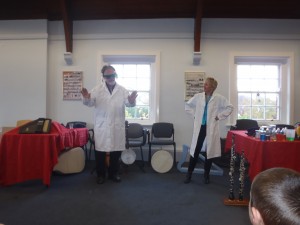 On went the show in Malahide 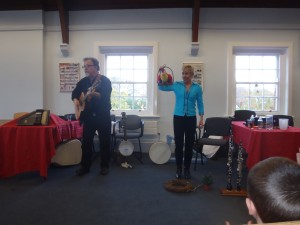 Our patient audience was as entertained by our speedy set-up as they were by our performance. 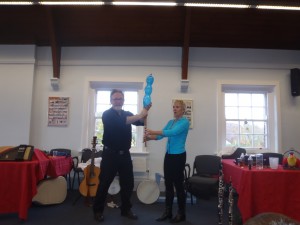 We had a nice visit with some folks afterwards who for some reason mentioned a Starbucks on the corner within sight of the library . 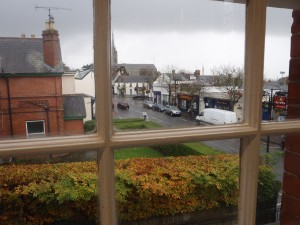 View of Malahide from library window 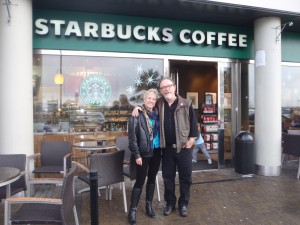 What?  A Starbucks in Malahide?  We hadn’t  come across one in 3 weeks since leaving Canada.  We did have to give it a try since our favourite coffee back home is indeed Starbucks French roast.
It was a 30 minute drive back to Dublin after that where we checked into our Holiday Inn where we would spend the last 2 nights of our tour.  It was very nice to have a few hours of downtime and administration catch-up before heading for our evening show in Blanchardstown Library, a 20 minute drive to the south. 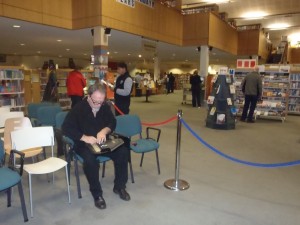 Arthur tuning up in the Blanchardstown Library, Co. Dublin

Blanchardstown is quite the very big and busy suburb of Dublin.  The library was in the big Civic Centre which was also part of the Blanchardstown Shopping Centre, a huge shopping area  bustling with post-rush hour traffic by 6 p.m.

We performed in a big open space down by the main door and being an evening show, adult passers by were rather amused by our performance and the laughter of the children attending. 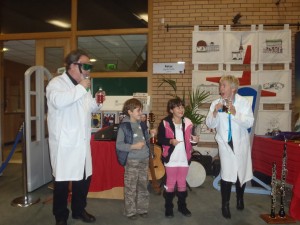 Performing with our young helpers at Blanchardstown Library

Before we knew it we were packing up and heading back to our hotel where we were more than ready for a late leisurely dinner of some of the best Thai food  we have had.  With the restaurant only being a short stroll from the hotel, we enjoyed a short walk afterwards in the clear and warm 19 degree evening.  Another perfect end to an Irish day.
4 Nov 2011