The day began with breakfast at our Oceanville B&B in Ballyvaugan overlooking Galway Bay and watching the fog roll in.

Galway Bay from our B&B window 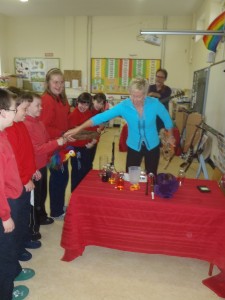 Around the corner and up the street was our first morning show of the day at Ballyvaugan National School where students from nearby Fanore NS travelled to join in.  There were a total of 38 students.  A lovely small and attentive group.

We decided to take the coastal route down the west coast to Ennistymon; our afternoon performance destination.  The drive down was magnificent.  The fog had mostly cleared and a little bit of drizzle did not dampen our spirits.  A few stops for picture taking; the barren Burren hills on one side of the road, spectacular coastal views on the other, and sprinklings of castles and ruins along the way.  The road became very hilly as we approached the famous Cliffs of Moher and wouldn’t you know it;  the fog rolled in once again.  Not to worry though since we could well remember the view of the cliffs from previous trips  so were not disappointed that we could hardly see past the end of our noses. 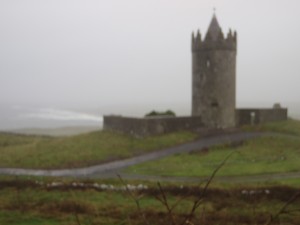 Castle past the Doolin Caves, Co. Clare (not out of focus but rain, wind and mist!) 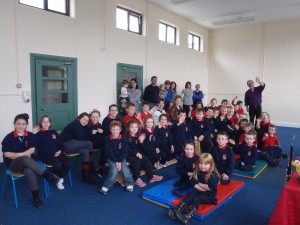 We soon arrived in the town of Ennistymon to ask for directions to the school, not in the town as we had expected (street names or addresses for schools are rarely used so sometimes it’s a by-guess-or-by-golly adventure).  So following a friendly local man’s directions, we went down the road a mile or 2 into the countryside, looked for the wee sign for the school (indeed a wee sign!), turned left, went a bit further, confirmed directions with a road construction crew, took another left and the tiny new school, Scoil Cholmcille Clouna, was at the top of the hill.   We were offered tea as we set up and were soon performing for a delightful group of 40 children.  Parents arrived at the end of our show in time to join in for our closing song, Donkey Riding, and after fond goodbyes, off we went again to begin a 4 hour drive crossing Ireland west to east en route to Trim, just northwest of Dublin.

There were a few stops along the way for some strolls and pictures of old church ruins and a few unplanned detours through cities as our maps, GPS and road signs could not always agree on the best route for us to take.  By 7 p.m. we had finally arrived at our destination of the Trim Castle Hotel, yes right beside magnificent Trim Castle (the largest Norman castle in Ireland built in 1100).

We are delighted to have a 5 night stay in Trim in such lovely accommodations.  These much appreciated arrangements made by Maedhbh Rogan who co-ordinated our upcoming area 5 library performances.  Over the week we will head out to various nearby towns for shows in the greater vacinity. 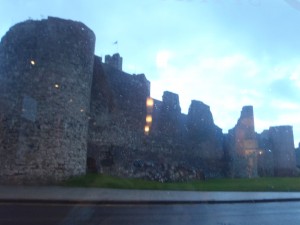