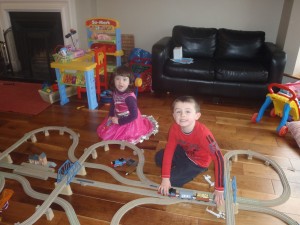 After a lovely sleep-in for a change, we joined our hosts downstairs for breakfast and a social time.  Soon afterwards, the children and Roseanne were off to an afternoon puppet show which is part of the weekend storytelling festival here in Lough Gur’s Honey Fritz Theatre where both of our two shows this weekend will also be held.

Arthur and I spent the day rehearsing our adult show program, doing a laundry (definitely due!) and drinking tea.   In the late afternoon there was a decision as to whether or not to have a run (since it was a day verging on sunshine) or to have a nap.  The nap won.

Rested up, we had an amazing evening performing at the Honey Fitz theatre in Lough Gur, Co.Limerick.  We were performing guests as part of their annual storytelling festival, along with Scottish storyteller, Little John Nee, and Irish musician, Sean Tyrell.  Also as part of the evening was some poetry reading by a local poet and storytelling presentations from the  primary and junior school winners of the county storytelling contest.  They were delightful!  A fun time was had by all.

And from Arthur about the evening: 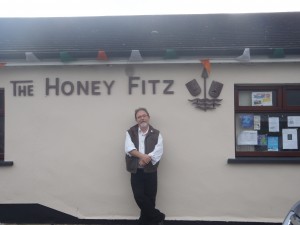 Arthur at the Honey Fitz Theatre

We’ve had the Irish experience that I’ve been waiting for but didn’t really know what it was. We were part of an evening of storytelling, music, poetry and community that included Sean Tyrell, Little John Nee, a local poet and the winners of the local public school story writing contest. It all happened at a small theatre, The Honey Fitz Theatre in Lough Gur, County Limerick, just outside of Limerick City. Our hosts were Roseanne and Pat Dunne. Roseanne is the energy behind the theatre. Wendy contacted her through her mass e-mails to Ireland. Roseanne got back to Wendy and asked what we were doing on the Oct 29th weekend (it was not booked because we wanted to take the time off). Wendy relented and said, “Why not?”, and we were hired to be part of this unique evening as well as to perform Sunday morning for ‘Tea and Brack’ after mass. Roseanne also asked if we could supply our rented sound system as the one they had couldn’t supply enough channels.

Well, it was a fantastic evening. Little John Nee was the master of ceremonies. He’s a one-man ball of energy, wit and talent, offering readings, stories and real Irish experiences through spoken word, ukelele, corn can guitar and wonderful acting. He made us all laugh so hard we were crying! Sean Tyrell has been playing and singing his music for over 40 years. He has 6 recordings and has toured the world, including a couple of gigs at our own Black Sheep in Wakefield, QC. He plays Mandocello and tenor guitar with a style and touch that is simple yet complex in his delivery: a fine collection of traditional songs and poems he’s put to music. The stories from the winners of the school story-writing contest were old hands at the art yet not older than 12: the two youngest were a pair of girls 9 and 11 years old and the ‘senior’ was 12. Their stories confirmed the ability of the Irish to turn a good yarn! The poet was a local gent who gave a great reading in an accent that was beyond our ability to understand most of it!
The audience of about 100 was most appreciative and hospitable. Wendy and I played about 30 minutes of tunes and songs (including my ragtime version of ‘O Canada’ with Ian Tamblyn’s ‘Woodsmoke and Oranges’ as an intro). Little John did about 40 minutes and Sean about 30 as well. It was a fine warm night of everything that you could imagine as Irish.